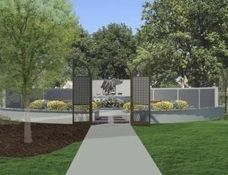 Our mission is to create a beautiful Angel of Hope Memorial Park
in memory of the precious children that have left this world too soon.
Please join our cause!
A special thank you goes out to Megan Hayward, CEO of Trails West Architecture,
for her passion and generous donation of time of to this project.
The future home of our Angel of Hope Statue will be at Gentry Park in Gering.

The Angel of Hope name comes from a best-selling book and television movie called The Christmas Box by Richard Paul Evans, who inspired this statue. In the story, an elderly woman mourns the death of her little daughter by making regular trips to the child's grave, which is marked with an angel statue (Angel of Hope). The statue evokes a profound and miraculous connection between mother and child and helps convey valuable lessons about the true meaning of life to others. This simple, non-religious but spiritual story has brought hope to thousands of parents who have endured the death of a child.

In 1996, in response to reports that grieving parents were actually seeking out the statue described in the book, Evans commissioned an angel statue to stand in the City Cemetery in Salt Lake City, which served as the setting for his book. Although the story is mostly fiction, the angel monument once existed in the cemetery, but is thought to have since been destroyed.

Once the statue was erected, people from all over the country flocked to the Salt Lake City cemetery seeking solace from their own loss and hope for the future. This has inspired close to 100 communities to bring the Angel of Hope statue to their town. And we felt it was very important to bring the Angel statue to Long Island.

In addition to representing hope to all parents who have endured the death of a child, it will be a gravesite for parents that don't have one. It will be a symbol of hope, a place to reflect, a place of healing and a special place for people to grieve. There will be a great spiritual wonder in this memorial statue. This Angel will be a symbol that will represent and honor our children.

Our children will live in our hearts and lives forever. Remember that our children live through us; and their lives can touch many others through us. Parents need to feel hope that they will survive and move on, and that their children will never be forgotten.